The organized crime in France is a $23 billion business (yearly reported). That’s like the worth of an entire tribe like Honduras (9+ million people). Enough said!

They were well known for attacking banks and robbing them. They would wear normal clothing with fake mustaches, beards and wigs and they would split in two groups: the first responsible for taking hostages, while the second went about acquiring cash and emptying safe deposit boxes. They made some 30 million Euros in this manner. 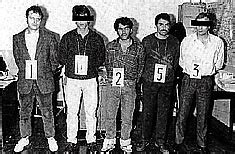