They are some of the most crazy criminal gangs in the world, specializing in stealing jewelry from all around the world. United Arab Emirates, Switzerland, Japan, France, Liechtenstein, Germany, United States of America, Luxembourg, Cyprus, Spain, Monaco, Austria and Australia, as well as Netherlands, Portugal and Belgium. These are their targets. So far they’ve stolen about $500 million worth of jewelry and one recent theft, in 2008, was worth $80 million alone. 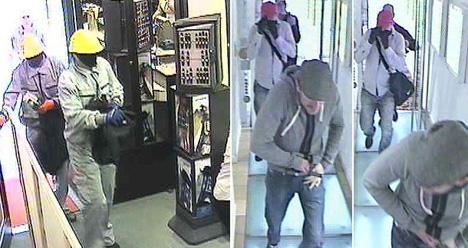 One time they painted a bench that was near a jewelry store with fresh paint so that no one would sit on it and see them in action; one time they dressed in T-Shirts with flower designs and escaped with a speedboat; another time they dressed up as women and robbed a jewelry store in Paris; and another time they drove luxury cars through the windows of yet another jewelry store and grabbed watches and other items worth a total of £8 million. They also used gorgeous females to seduce the owners of jewelry stores for months, and gather all the information necessary about that particular jewelry store, to then get in on the action and steal. One time they bought a store near the jewelry one, and after months of “seducing”, they had enough knowledge to go from their bought store to the one next door and steal all the jewelry. (source)

In 2000 it was estimated that almost $1 billion was made in illegal profits in Serbia. By the early 2000s, the Serbian mafia reportedly had more money than the Serbian government and was better armed than the Serbian Army and Serbian police. In 2003 the Serbian Statopus got pissed off and went on full war arresting some 10.000 people (gang members) – factor in that Serbia’s population at that time was around 9.2 million people, so 10.000 arrested individuals is a huge number. On top of that, “123 criminal groups were shattered with 844 members awaiting trial; 3.949 people had criminal complaints issued against them. 28 kilograms of heroin, 463 grams of cocaine, 44.837 kilograms of marijuana, 4.960 kilograms of synthetic drugs and 688 stolen cars were recovered in a single day.” Later on in 2009 in one single day they arrested over 500 gang members “in the biggest anti-drug bust ever in Serbia.” Another time they used around 2.000 police officers to search the whole country (primary and secondary schools, clubs and cafes) to prevent drug trafficking to young people. Despite that in December 2009, the Interior Minister Ivica Dačić said that "half of the Serbian sport clubs are led by people with links to organized crime". Despite all of this Serbia is ‘proud’ to ‘host’ some highly successful crime groups, including one of the largest cocaine import enterprises in Europe ("Groupa Amerika"), and the "YACS" Crime Group, out of NYC. And, of course, the Pink Panters. (source)